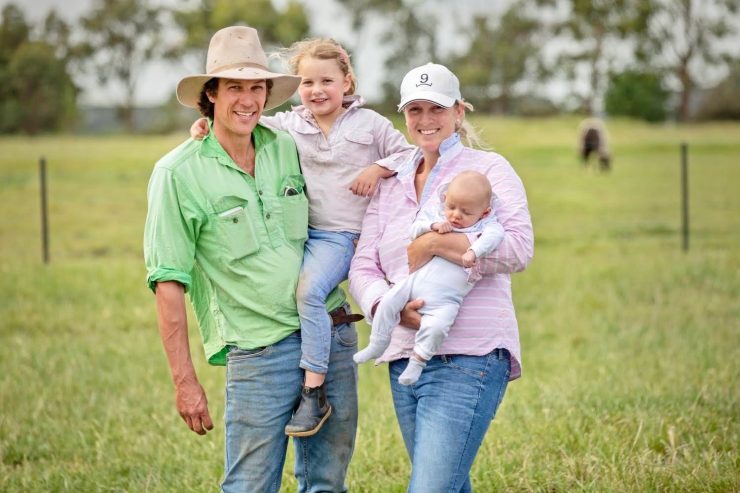 This is no doubt a love story. The story of a city boy’s love of the land that lead him to pursue a career in corporate agriculture. Then, falling in love with his now wife who happened to be a farmer’s daughter with a desire to take on the family business.

James Knight made the brave decision to face his own personal demons to take up an integral role in running the primarily beef cattle property at The Sisters, south of Mortlake in Southwest Victoria.

He’s taken that opportunity and run with it – operating the farm through a strategic lens with a focus on innovative techniques and technology.

Love of the land

Looking back, James believes his interest in agriculture started after his first trip to stay with his uncle and aunt on their farm during the school holidays.

“Just got the bug really early and I remember how emotional it was every time I got dragged away from that farm,” he recalls. James spent most of his spare time during childhood on that farm.

“I knew where I wanted to be very early,” he explains. James says such was his love for the land, he didn’t even want to finish school.

“Just got the bug really early and I remember how emotional it was every time got dragged away from that farm.”

“It’s a good story! I remember it so clearly. I used to tuck myself in the library at lunchtimes and read the national geographic section looking for all these outback stations, ringers from the Top End that were doing cool stuff,” he remembers.

At the time, James had no idea what his parents were paying in private school fees so that idea was put to rest – temporarily.

Straight from school to jackaroo life

James completed his final two years of school and did make it to the outback with a posting as a jackaroo in the Riverina.

“It was fantastic straight out of school and just a really good grounding. We worked hard. We did all the chores that we had to do and then just had a great group of people that played pretty hard on the weekends too.”

That experience only cemented James’ desire to pursue a career in the industry. He ventured back into Melbourne for University. But a choice eventually came up between a job in corporate agriculture or a life on the land as a farmer. Meeting his now wife, Georgie, lead him to give farming a go.

“It was fantastic straight out of school and just a really good grounding.”

“I actually came to Georgie’s farm while we were going out to help and work in the business. At the time, my father-in-law wasn’t ready to step back and pass it on to the next generation,” James shares.

So, his stint on the family property was short-lived at that point and James says it was a very low stage of his life.

“I got pretty dark post that involvement here. It saw me in a really bad place from a mental health perspective,” he says.

James picked himself up and went for an interview in corporate agriculture.

“I was just fortunate that when I went to that interview, at a point in my life when I’d never been flatter, that they actually liked me and thought I had potential!”

That job was at Warakirri Cropping and set off a rewarding and happy time in James’ life and career. However, it wasn’t long before Georgie broke the news she was going back to the family farm.

“I was really happy in my role in Melbourne because I’d been given the opportunity to become Operations Manager for the whole business. So, quite simply Georgie said to me one night, ‘I’d like to go back to the farm. Dad needs a bit of a hand’.”

Complicated family dynamics and succession planning are familiar themes to many rural families and James and Georgie managed to navigate their situation to make it work for everyone.

James’ father-in-law has been happy to give up the running of the business while still play an active physical role in the day-to-day. There’s plenty to do with three farms across 2200 hectares, so they divided the roles. Since James and Georgie took over the business side, the farm has grown from 600 breeding females to 1700.

“The growth has been big. We’re operating probably 80 per cent more land now than what we did when we started,” explains James.

James’ background in the corporate world turned out to be the perfect skill set to take the farm to the next level, incorporating new technology to make the workday more efficient.

“I didn’t want to be another farmer driving around thinking they were busy,” he says.

“The first 12 months was really tough just trying to stamp out the cultural non-evidence-based activities that were going on.”

The farm utilises software programs like AgriWebb all the staff have access to for the daily tasks, like stock movements and food on offer. Additionally, instead of driving around and looking at fences and water levels, that is now all done remotely by simply looking at a smartphone or tablet.

“I sleep better at night knowing things are ok,” he says.

James says his career choice is no doubt challenging but overall, it’s how rewarding farming can be that is what he loves most. His favourite place on the farm though is his home with his wife and children. Walking back in through the front door of an evening is the best reward he could ask for. So, this story is still very much about love, even all these years later.

Hear more stories just like James’ by subscribing to the Telling Our Story podcast on iTunes and follow podcast host Angie Asimus on Instagram for more updates.