There are approximately 85,681 farm businesses in Australia, 99 percent of which are family owned and operated.

Each Australian farmer produces enough food each year to feed 600 people, 150 at home and 450 overseas. Australian farms produce around 93 percent of the total volume of food consumed in Australia.

As of 2016/17, there are 304,200 people directly employed in Australian agriculture. The complete agricultural supply chain, including the affiliated food and fibre industries, provide over 1.6 million jobs to the Australian economy.

Agriculture and the economy

Australian farmers export about 77 percent of what they grow and produce. Australia’s farm exports earned the country $44.8 billion in 2016-17, up from $32.5 billion in 2010-11. The value of our farm exports, and indeed the future of Australian agriculture, depends largely on conditions in overseas markets, due to our high level of exports.

Australian farmers remain internationally competitive through efficiencies and productivity growth. The growth in the farm sector has increased steadily from 1974-75 to 2016-17, consistently out-performing other sectors.

Agriculture and the environment

Australian primary industries have led the nation in reducing greenhouse gas emissions intensity — a massive 63% reduction between 1996 and 2016.

Australia’s farm sector has backed an economy-wide target of net zero emissions by 2050. Some agricultural industries, such as red meat, are planning to be carbon neutral as soon as 2030.

Through the Murray Darling Basin Plan, farmers have returned more than 2,000 gigalitres of water to the environment each year – much of it through water efficiency measures.

Since 2011, areas managed for conservation have continued to expand and now cover about 18% of Australia’s land area.

Farmers are at the frontline of delivering environmental outcomes on behalf of the Australian community, with 94 percent of Australian farmers actively undertaking natural resource management.

The NFF was a founding partner of the Landcare movement, which recently celebrated its 25th anniversary.

The NFF compiles a guide to the critical facts about Australian agriculture. Download the 2017 edition of our Farm Facts document by clicking below. 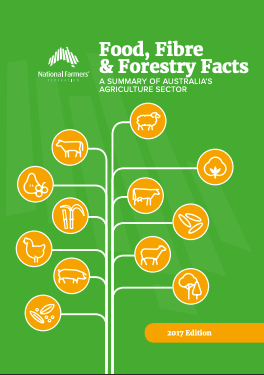