Travelling across Australia, French entrepreneurs Marion and Alexis fell in love with the Australian landscape but were shocked to find how much plastic waste was being produced, even at Australia’s most iconic destinations.

Among the waste they saw, straws were a frequent item along with cigarette butts and plastic bags and packaging.

After a video of a turtle with a plastic straw stuck in its nostril went viral on social media, drawing in over 40 million views, consumers were quick to demand an end to plastic straws.

Everything was made abroad and imported into Australia.

The pair started looking for alternatives and what local resources were available to them so they could create a 100% Australian straw.

Their research led them to rye straws and the birth of their brand, Mister RYE.

Rye is typically used by farmers for its grain. After the stalk is harvested, a few centimetres of stubble is left in the ground and becomes feed for livestock.

“Rye is a by-product of our local agriculture industry so we are using something that’s already here to fix a current issue: plastic pollution,” Marion said.

“Rye is a very strong plant [and] following our studies, we have noticed that rye is much stronger than other plants and very suitable to become straws”.

Marion and Alexis work with farmers in the Mallee and Riverland region of South Australia, located 300km North of Adelaide and say the company is proud to work with local farming families to add value to their existing farming practices and crops.

Perrie and Josh McIntosh, organic mixed broadacre farmers from South Australia, are just some of the farmers working with Mister RYE and operate a 2,393-ha property Riverland and Murray Mallee districts of South Australia.

Josh said his motivation to work with the company and produce straws made from rye stemmed from his own desire to help the environment while Perrie said it was exciting to work with someone who has a fresh perspective on the industry.

“It’s good to see someone who has initiative to think like that,” Mr McIntosh said.

“Sometimes it takes someone outside with a fresh perspective and someone who is not so intimately involved with how things should be and how they’ve supposedly always been in agriculture,” Mrs McIntosh added.

Over the summer, Mister RYE found ways to harvest mechanically with a vintage 1950/60’s sunshine reaper and binder.

While the straws still need to be cut on farm, the company is now looking into machines and automation that will allow them to produce more straws.

“We know manually, we cannot create as much straws as we wish we could so we’re of course looking into machines and automation and being able to increase the volume of straws we can produce would be our goal,” Marion said.

All images courtesy of Mister RYE. 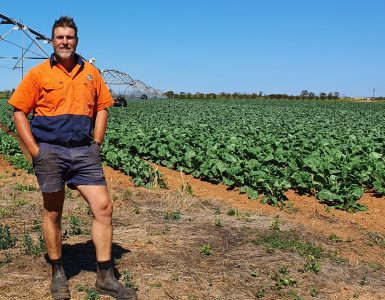