It’s no secret that kids raised in the Australian bush are a unique breed. If you’re a farm kid yourself, we’ve compiled just some of the reasons you’re part of a special bunch.

1. You’ll be skeptical about the concept of indoor pets

Never let it be said that you don’t like animals, they’re great. But they exist in the following (descending) hierarchy: humans; working animals; edible animals; others.

An animal’s place in that hierarchy dictates its proximity to the house, but only humans should make it past the verandah.

To disrupt this order would be a sin against nature – upending the separation between man and beast… well, that’s how you feel anyway.

2. You understand that different rules apply to ‘paddock language’

Sometimes the language of polite society can’t adequately convey the frustration of a bogged airseeder or a recalcitrant mob of sheep.

That’s where ‘paddock language’ comes in. Farm kids quickly learn that words hurled at working dogs in the sheepyards can’t always be used in front of Grandma.

A decent part of your childhood play area was probably a scaled down commercial farming enterprise, complete with a tractor and perhaps even a set of offsets or a chaser bin.

You had it made if your fake farming gear was branded with the name of a real machinery company. And if you stayed on the land as an adult, this was probably the start of a costly addiction to red or green paint.

Radios in farm houses, tractors and Toyotas across the country are tuned to the ABC at midday for The Country Hour.

The marketing geniuses at the ABC save the best till last, with the market report bringing up the close of the show. Farm kids know well that the market report is a time for silence – a silence that lasts between 5 minutes and 5 hours, depending on the latest price for weaners at Dubbo saleyards.

5. The greatest party you’ve ever been to was probably in a woolshed

If you call Double Bay home, you might not think sheep manure and shearing paraphernalia make for a good party. You’d be wrong.

The classic woolshed party is a right of passage for farm kids, allowing parents to rest easy knowing that nothing of real value can be broken. In the land of ‘buffel, brigalow and cattle’ sits a small community with a big heart and an even louder voice. Steeped in agricultural history, the tiny town of Taroom is your quintessential Queensland... With many kids hard at work learning from home across the country, there’s never been a better opportunity for parents to talk to their children about where food and fibre comes from – and the incredible... 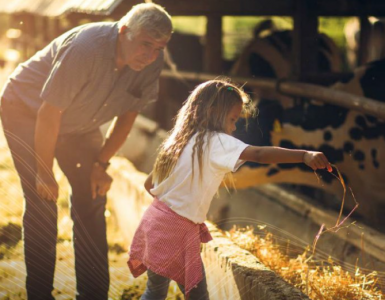 For young children, growing up, or even visiting a farm, is a wonderful educational experience filled with experiential learning and fun. However, as an operational business it can also pose several safety risks to...