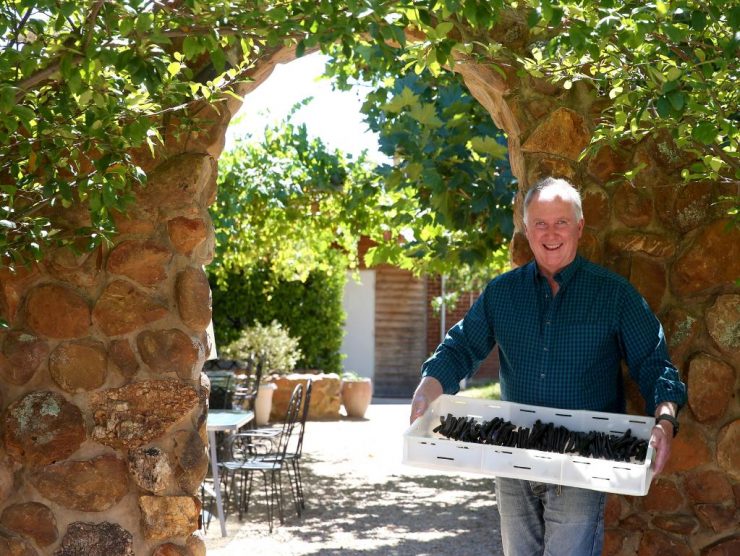 How does a wheat, spelt and barley farmer become a confectioner? It’s an unusual story but the decision to purchase an abandoned mill built in 1935 and transform it into the Junee Licorice and Chocolate Factory has put this little town on the map.

Seeing as that went so well, the Druce family have now turned their attention to spirits with the Corowa Distillery Co, making whisky from their own barley. Neil Druce has agreed to give some insight into this remarkable diversification to achieve an off-farm income.

Neil has been a farmer his whole life and loves it but stepping onto the factory floor still feels extra special. “I really do enjoy being at the factory, enjoying the product we make but also seeing the happy people coming and going,” he shares.

It’s a long way off how this story began with Neil’s dad, Alan. “In 1962, he made the decision to turn the farm organic!” says Neil. That would have been a radical decision all those decades ago.

At the time, it was kind of heartbreaking for dad because they didn’t really call it organic farming. They just called it stupid farming.

“At the time, it was kind of heartbreaking for dad because they didn’t really call it organic farming. They just called it stupid farming. The neighbours felt it was the dumbest thing to do just when the chemicals were coming in to make farming easier, dad decided to go against it.”

Like father, like son, Neil made a fairly radical decision of his own when their small on-site mill broke down. There, he found an old derelict flour mill, five storeys high, made of brick and tin with French windows. Incredibly, the Druce family is still farming organically today and happily, wheat is a key ingredient in the licorice and their barley goes into the whisky.

We were one of three organic licorice factories in the world and the only one in the southern hemisphere.

“We were one of three organic licorice factories in the world and the only one in the southern hemisphere. Around 60% of people love or like licorice but 95% of people crave chocolate. So, we became famous for licorice but sold a lot of products through chocolate.”

It’s clear now that they were onto a winner but locals at the time were careful. “They want to make sure you’re real,” says Neil.

“We just put our heads down and got working.” There were surprises along the way, like finding a hydroponic marijuana operation on the disused level five.

“We were doing cookies at the time, so there were a lot of different stories happening about what was really going on in the factory,” Neil laughs. “I did find though as we employed more and more locals, that we got more local support.”

My belief is do something well and then become famous for it.

Apart from a pretty average first batch, the Druces found the perfect recipe. “The thing is not to take shortcuts. Do everything properly. You might have to end up charging a little bit more than others but you’re not going to add a chemical to fix a problem. You’re going to do it properly.” It’s an ethos that clearly works with the factory now producing confectionary five days a week.

“In my mind, you just simplify what you are trying to do. My belief is do something well and then become famous for it. There are only two steps, and I don’t get confused with it.”

Not to be stopped there, the Druce’s moved swiftly along to whisky. “As much as people love licorice and crave chocolate, whisky has such an aspirational thing to it. How often do you ask people if they drink whisky and they say, no but I want to. There must be so many movies and photos of people drinking whisky. It’s like they’ve really made it in life!”

In another feather in Neil’s cap, his Corrowa Distillery Co. was one of two distilleries in the world asked to make a whisky to honour the Queen’s Platinum Jubilee.

I really do enjoy being at the factory, enjoying the product we make but also seeing the happy people coming and going.

“It’s just so exciting. We got an email and a request asking if we’d like to do it. We said yes!”. Big things have come from the second mill the Druce’s purchased in Corowa to produce alcohol. They actually bought the state heritage listed flour mill in Corowa for the tiny sum of $1.

Neil still has a huge passion for trying new things, no matter how hard. He warns against doing things for money, and says for him, it’s always come back to the heart.

“This is a little bit touchy, but every time people see the crowds here, they think do you want me to get a truck to put all the money in! They think because you run a business that you’re rich. For most of our time here, we’ve struggled to pay our bills.” Part of the reason Neil started all this was to diversify the on-farm income streams.

He’s made bold decisions, just like his dad Alan, he wouldn’t have it any other way. So, what’s next? Maybe a retreat where people have great food and beverages (likely plenty of chocolate, licorice and whisky) but also have their mental wellbeing nourished as well. Sounds pretty good for the body and the soul!

Hear more stories just like Neil’s by subscribing to the Telling Our Story podcast on iTunes and follow podcast host Angie Asimus on Instagram for more updates.