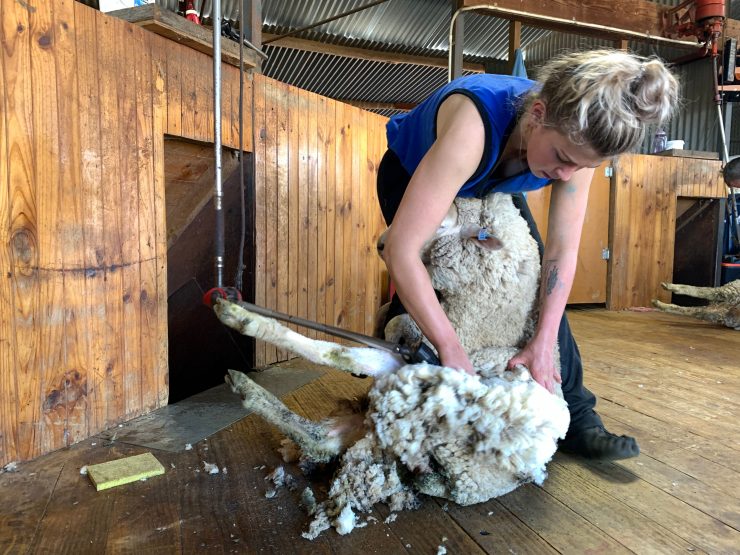 If you tell Joanna Treasure not to do something, chances are, that will serve as the inspiration she needs to do exactly what she’s been advised against. That was certainly the case when an interest in shearing was met with scepticism from her friends and family.

“I think from my dad’s perspective, he was worried about me starting to shear in case I hurt myself but I do have a tendency to do things just because people tell me not to. I like that sort of challenge.”

While doubt over her abilities initially fanned a flame in Joanna, she says learning the skill of shearing has now become a true passion. “I fell in love with the challenge in terms of the skill that’s involved, something that I really don’t think you understand until you try it. The physical challenge as well, and then all intertwined with that is the mental challenge of having to keep walking back into that pen when your back’s killing you, you’re not shearing good sheep and I just love the work satisfaction,” Joanna explains.

For many people unfamiliar with the process, hearing of female shearers may not seem all that noteworthy but due to the size of these sheep, the relative size and strength of the person shearing them is exceptionally important. Joanna explains, a typical crossbred ewe weighs between 70 and 90 kilograms, while Dorset ewes are quite a bit larger.

“I would say some sheep that I’ve shorn would be upwards of 100 kilos.”

To maintain the required level of fitness, Joanna compares the commitment to that of training for a marathon. “It takes a long time to get your fitness up. If you stop for a couple of weeks, you seem to just lose it all. So that’s sort of why I try to go every week even if I’m buggered from work.” That’s a huge commitment for the 24-year-old. Joanna already has a full-time job working in the family farm in Cowra in Central West NSW. That means she can only shear on weekends.

Given she’s essentially a part-time shearer, making it into the coveted 200-club (shearing 200 sheep in one day) is a wonderful achievement. “One of the first milestones for a learner shearer is doing their first 100 and I would say that’s definitely the hardest one. Then, as you get better, you join the 200 club.” Gun shearers even make it into the 300 or 400 club!

So how do you become a shearer? Joanna in fact went to shearing school in 2020 and subsequently took shearing jobs once or twice a week on weekends to maintain and improve her skills. “My experience in the shearing industry, right from the beginning, has been overwhelmingly positive,” Joanna says.

“The interactions that I’ve had with particularly older male shearers has really surprised me. It goes to show, you shouldn’t make assumptions about people.”

Joanna’s biggest concern about the job is the way shearing is perceived from outside the agricultural industry as a “second-tier profession”. Joanna explains, it’s a mystery as to why that is because it’s a real skill to be a shearer and they work incredibly hard. “That really needs to change.”

“It’s a really worthwhile profession and you can actually earn a lot of money shearing.”

The public perception of the job could well be among the reasons why it’s becoming increasingly harder to replace retiring shearers. Joanna explains it’s a real shame because the career can be extremely lucrative. “The going rate is about $4 a head, to shear a sheep. So if you can shear 200 sheep a day, which a lot of full-time shearers can, you can earn $800 a day.” During the busy season, it’s a substantial income, especially for young people hoping to save to buy their own farm. “I don’t think that’s highlighted anywhere near enough,” says Joanna.

It’s also a very flexible profession. Joanna chooses not to travel more than an hour from home to shearing jobs, given she has a demanding Monday to Friday job. Others may travel large distances and stay in accommodation provided on the farm for a week at a time. “There is a lot of travel involved but of course, you can claim all your travel expenses as a shearer,” explains Joanna. Joanna says it’s even possible to shear all year round. In Australia, there’s a quiet period over winter. “A lot of shearers actually use that opportunity in that quieter period to travel overseas and shear in other countries.”

Joanna says the work satisfaction is like no other job and describes it as therapeutic. “If you’ve got things on your mind, it can be great to just slog it out for a full day and feel sort of physically exhausted. Also, it gives you time to think,” Joanna recalls.

“My favourite thing about working in Ag in general is just that every day I get to do things that, in inverted commas, girls don’t do. There’s something really special about that.”

There’s no doubt Joanna Treasure is a formidable woman. She says, the next stop is, the 300-club. And good luck to anyone who tries to stop her! 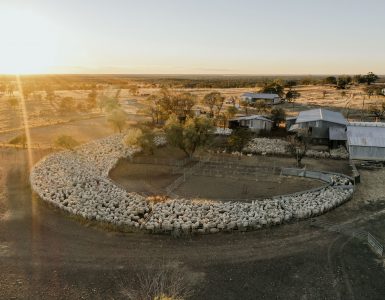