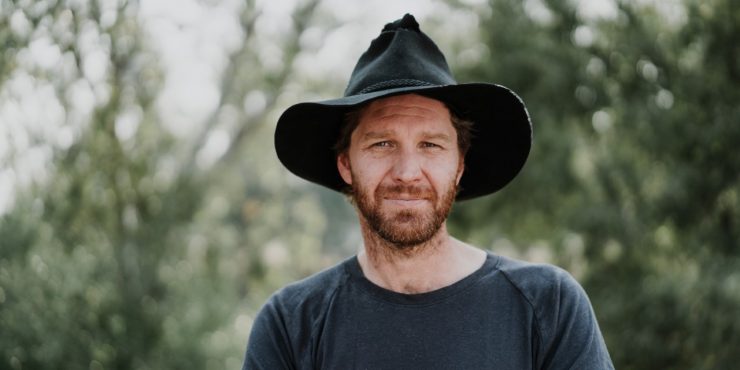 This story starts with a father and son, a bottle of red wine and a hilltop. That afternoon delivered a light bulb moment to David Ferguson who set about diversifying the family’s income stream to add Air BnB revenue to the existing traditional farming operation.

The idea has now turned into the social media sensation that is JR’s Eco Hut. If you haven’t heard of it – you’ve probably seen it. An off-grid A-frame cabin perched high on a hill. It’s the latest chapter in the rich history of Kimo Estate in the NSW South West Slopes.

The estate was once home to future US President Herbert Hoover, the site of a gold rush and most recently a sheep and cattle property.

One of the most defining periods in this part of Australia was the early 2000’s which saw a drought like few others. In the years of 2010/11 the drought finally broke and the Ferguson family had made it through.

However, the experience left a deep scar and David Ferguson’s parents encouraged him to pursue another career. David embarked on a successful career as a photographer working in events. In the end, it was a combination of his farming know-how from childhood and training in the creative arts that has proven to be the perfect combination to diversify operations at Kimo.

“It’s certainly the best decision that my wife Emilia and I have made in our married life. We were in a bit of a spot up there living in Noosa. I was shooting weddings all over Australia but just didn’t feel like we were getting ahead. It felt like we were dog paddling a bit.

We just mentioned to mum and dad one time that I might come home and see if I’m a farmer.

When David returned to the land he worked the farm with his parents but it didn’t take long to find his feet. David decided to change things up. “I was able to get to know the ropes for the first 18 months or so and then started to add my little twist on what this place does.”

That twist was always about finding a source of income that wasn’t weather dependent. David and his wife Emilia decided to host country weddings and agri-tourism. Both have been highly successful but it’s hard to top the response to JR’s Eco Hut. “It’s staggering really”, says David.

We were having a BBQ up on a hill drinking a bottle of red up there and dad said, ‘this would be a good place for a house’. I said, ‘that’s a good idea, why don’t we build one’.

The family had an architect draw up some plans and David says, “They came up with a design that obviously talks to people.” He says the property is now drought and flood proof. Kimo has this year made it into Australian Traveller’s Top 100 Unique Stays in the country.

Kimo remains a working sheep and cattle property and visitors are welcomed to observe what goes on.

“People who stay here, generally have no idea about what goes on,” says David.

He’s concerned in some circles farmers are being inaccurately portrayed. “It’s undeserved, so to be able to try and show people what actually goes on, give them a realistic view of what a farm is and looks like, it’s part of the plan.”

Part of the mission statement that we have was to actually try to reconnect city people back to the country.

David says the response to seeing a working farm has been overwhelmingly positive. “They see the sheep running around the paddock and having quite a lovely lifestyle of eating and just wandering around. They see that we look after the animals.”
David describes his role on Kimo Estate as one of guardianship.

“Looking after the place is a big part of what we do and an important part,” explains David.

Kimo Estate is one of many farms to learn to adapt to the unpredictable nature of the climate. It’s a way forward that seems to suit farmers with a desire to diversify. David even hopes to one day open up the shearing shed with a viewing deck to close that city country divide even further.

For now though, it’s a good spot to sit on top of a hill with a drink of choice and witness the impressive workings of an Australian farm.

Hear more stories just like the Ferguson’s by subscribing to the Telling Our Story podcast on iTunes.