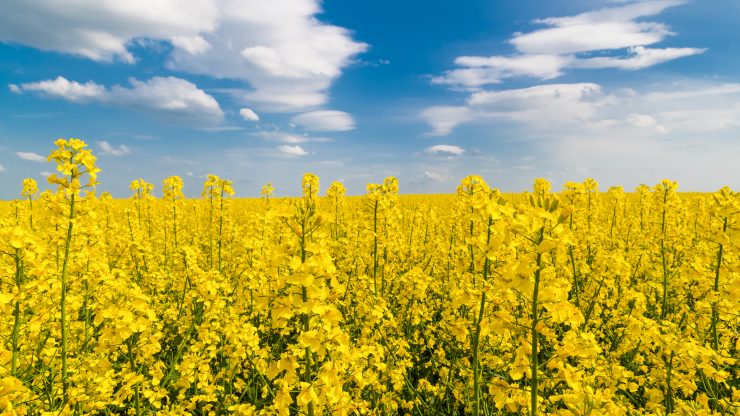 Harvesters are warming up to start rolling, through what is forecast to be a bumper winter crop. If you’re out and about in parts of Australia’s grainbelt this spring chances are you’re likely to see these 4 crops.

*Please note, while these crops sure are spectacular, they are also someone else’s property. Be sure not to trespass but rather admire their beauty from the roadside!

Canola
You may have noticed the bright yellow hues of canola crops scattered along the landscape over the past few weeks. With a beautiful yellow flower atop of a tall green stem, canola is easy to spot from a distance and even easier to identify.

Canola is an oil seed plant grown for its use as a food-grade oil, for biofuel production and as a stock feed. It was first grown commercially in Australia in the late 1960s, but it’s history goes as far back as 2000BC!

The winter-growing oilseed crop is currently grown across wheat belt areas of temperate Australia. Australia is also one of the biggest exporters of canola.

Wheat
Throughout spring wheat will turn from green to a golden brown in preparation for harvest.

The average wheat plant grows to around 1 metre in height. Each plant has a single main stem (the head) plus 2-3 secondary stems (known as a tiller). At the top of each tiller is a ‘spike’ which contains 35-50 grains.

Wheat is grown along what is called Australia’s wheatbelt. An area stretching across Queensland, NSW, Victoria, Tasmania, South Australia and Western Australia.

About 80 per cent of Australia’s annual wheat production is exported to over 50
countries, including Asia, Indonesia, Japan, Iran, Iraq, China, Malaysia, South Korea and Yemen. The remaining 20 per cent is used by the Australian market to make flour, breads, noodles, biscuits, cakes and pasta plus it can be used as livestock food.

Barley
This is where it gets tricky… Barley and wheat do share many similarities in appearance, however, the best way to tell the two apart is through the beard, which is the bristly material protecting the kernel. In barley the beard is longer.

Barley is a widely grown and highly adaptable winter cereal crop that is predominately used for stock feed and the production of malt for the brewing industry.

Chickpeas
Chickpea crops can be identified by a small purple flowers growing from short green bushes or little green pods, which contain the chickpea. The important legume crop was first grown as a commercial crop in Goondiwindi in the 1970s. From there, it has grown to be the second largest legume grown in Australia.

Chickpeas prefer warmer growing conditions with medium to low rainfall, that is why it is predominately grown in northern farming systems in NSW and Queensland. However, it is rising in popularity in southern states including Victoria and South Australia, as well as Western Australia.

There are two groups of chickpea – desi and kabuli – which have different growth requirements, markets and end-uses.

Once harvested, many chickpea crops head to supermarket shelves to be sold.

Find out more about these crops at GRDC and AgriFutures.