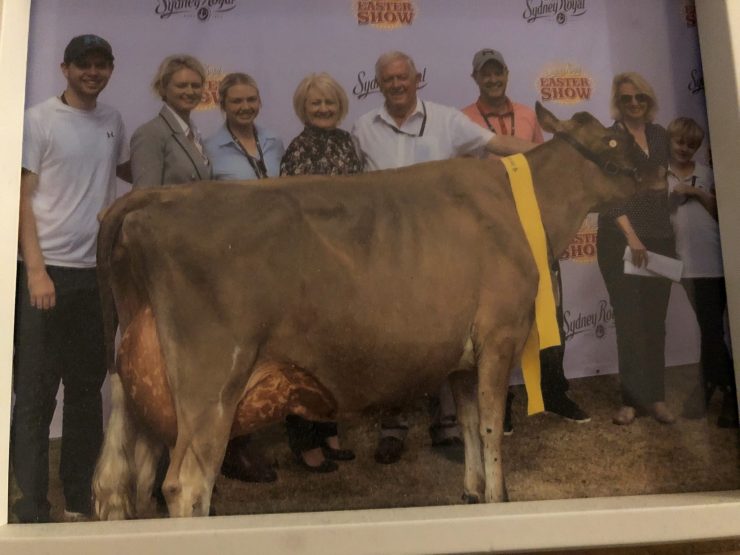 When you’ve been farming for as long as the Brown family, plenty has changed over the years. One thing that’s stayed the same though, is the incredible dedication to exhibit their dairy cows at the Sydney Royal Easter Show every year since 1885.

The Browns operate one of the oldest Jersey Studs in Australia and have claimed many awards along the way. You’ll often see them leading the ever-popular Grand Parade or tending to their animals in the cattle yards. The Browns’ cows are magnificent to behold, and they have taken the family all over Australia and the world.

Robert Brown recalls how they used to take cattle by steamboat from Wollongong Harbour into Darling Harbour, just to make it to the show.

“The relatives and friends in Sydney used to walk them to the old showgrounds at Moore Park,” Robert says.

“There’s a joke in our family that such is the love of Sydney Royal that anybody who passes away prior to or during the show, we put them on ice and have the funeral after!”

They strive for excellence in their cattle and consider an award from the Royal Agricultural Society of NSW a real honour. “It’s something we look forward to. It’s just become part of our life. Even when I was a boy, I think I’ve only missed one show in 76 years since I was born,” he explains.

“There’s a joke in our family that such is the love of Sydney Royal that anybody who passes away prior to or during the show, we put them on ice and have the funeral after!”

So, what does he love so much about it?

“It’s everything. It’s the atmosphere, the people you meet, probably some you don’t even see during the 12 months between each show,” says Rob.

It’s also a fascinating chance to interact with consumers. Many people drink and eat dairy products but haven’t seen a cow before. “The most favourable comment about the Jerseys is their lovely brown eyes,” Rob says.

To the trained eyes of the judges though, Rob says the criteria has changed over time.

“It’s like trying to breed the best racehorses. We’re trying to breed the best cows. We’re up against the best. The judges are always looking for that typical Jersey type. Over the last 10 years, they’ve got bigger. The judges are now favouring that more and the judges these days don’t like any excess fat on the animals. They must be trimmed down. Some might say ours are in too good condition,” he laughs.

The Browns once ran a large-scale operation but now they focus on a smaller stud with good breeding their key focus. Rob says the dairy industry has been wonderful for his family and encourages others not to be put off by the misconception that it’s all hard work and no play.

“We just love it. We always said though that we’d make time for weekends off, plus holidays. We’ve been fortunate enough to get people to work and look after the cattle while we are away.”

“Farming is very interesting and our way of life. We enjoy it.”

The Browns are proof farming can take you places. They’ve sold their cows in Japan and India and travelled with the cattle to ensure their safe arrival. Rob says nothing beats life on the land – the independence, open space and stars at night are better than any other job in the world.

“There are hard times naturally. There are droughts and floods and fires but it’s a way of life,” he explains.

“Farming is very interesting and our way of life. We enjoy it.”

Keeping out of rocking chairs

The future is looking bright for the Browns’ cows. With two daughters of their own, Robert has welcomed two sons-in-law into the business.

“They have never had anything to do with cattle beforehand,” he chuckles. “So, it was an initiation for them, but they love it.”

This year, for the first time, their 12-year-old grandson will take part in competitions at the show. A proud moment for Robert and his family. “We’re enjoying seeing that and enjoying semi-retirement. The cattle just keep us out of the rocking chairs,” he laughs.

For anyone who is walking past the Easter Show this year, or any other year for that matter, look out for the name ‘Wollingurry’. It means ‘plenty of fish’ in the local Indigenous language and also happens to be the name of the Browns’ stud. Rob says he’d love to have a chat and encourage others to take up a career in the dairy industry.

Hear more stories just like Robert’s by subscribing to the Telling Our Story podcast on iTunes and follow podcast host Angie Asimus on Instagram for more updates.