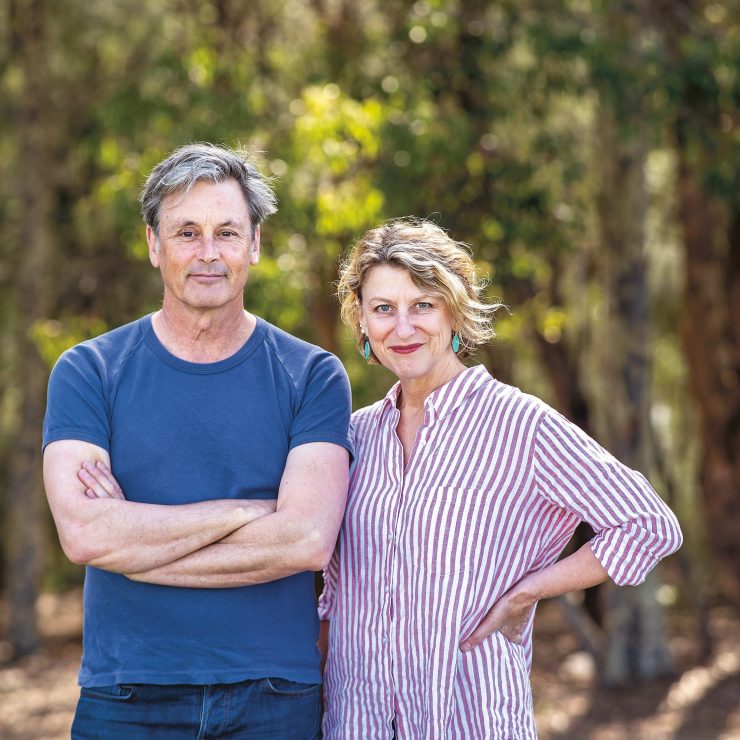 If you had told young graphic designer, Laura Dalrymple, that she and her film maker partner would find themselves running a butcher shop, she wouldn’t have believed it. It turns out, working in the meat business has become the most meaningful path they’ve both ever taken.

From a passion for eating ethically, Feather and Bone in Sydney’s inner-west suburb of Marrickville was born. While the shopfront is urban, Laura and Grant spend a lot of time on farms to see first hand how the animals are raised. “There’s a lot to love,” she says.

The couple was fascinated by why people were more interested in where the grapes in their wine were grown than they were in where the food on their dinner plate originated.

“I thought this is a really wonderful project. It’s got so much integrity and it’s so interesting and it’s so important,” says Laura, reflecting on the early days of the business.

“That’s how a filmmaker and a graphic designer ended up working in a butchery!”

Laura explains they have a particular interest in heritage breeds. “We could see there was sort of a monoculture in the landscape. Not just in livestock but also in plants. We’ve had an incredible reduction in the variety of foods that we eat. That rainbow of biodiversity has been narrowed down to a very small number of options.”

It’s also very much about how the animals are raised. They source their animals from regenerative farms with a focus on soil health. Laura says, customers generally come back to the same few questions – how did the animal live and how did it die. She believes it’s important to address both.

With such sharp focus on the farming process, Laura is adamant that, as retailers, they have just as big a responsibility to respect the life of the animal as the primary producer does.

“We believe, if you are going to take a life, you have to honour the life taken by making sure you use absolutely everything. It’s a big deal to take a life,” says Laura. That ethos is central to why they are whole animal butchers. “There are lots of wonderful cuts on that animal that people don’t use as often as we think they should.”

We’ve forgotten how to cook the whole animal because it’s not necessary anymore. We’re used to getting what we want, whenever we want, wherever we want.”

Laura explains, there is a narrowing down of the ability to cook the variety of dishes that our forebears would have prepared.

“A lot of people know how to cook a chicken breast and cook a steak but they’re at a bit of a loss if you go past that.”

A large part of that is also the fact that more people live in cities and there are fewer country connections among families. The Feather and Bone model is admirable but it’s challenging.

“We have to do a lot of education to encourage people not to be frightened to try these other cuts,” says Laura. “We have to work a lot harder to use the whole animal. We have a kitchen for example, we make broths, we make things out of the extra bits.”

Waste aside, there are other key advantages. “We can read how the animal has responded to the season and report that back to the farmer. Of course, if there are any issues in transport, it’s perfectly transparent in the carcass. When you buy boned meat in a box, you don’t have any advantages in seeing that information. Laura describes the process of the animal dying as “the scary corner”.

“The uncomfortable truth is, whatever you choose, you’re involved in killing something. Even if it’s bread, the field in which that wheat was grown. Tiny animals died in the production of that bread. Nobody gets away scot-free. We all have to pay for our lunch. There’s no way around it but when you’re killing a big beast, it’s a big decision.”

That’s why Laura says they choose honesty and transparency with what farmers and abattoirs they do business with.

It needs to be an end to end process of respect from birth to death.”

To put all that information in one place, Laura co-authored a book called The Ethical Omnivore. It’s a bid to address queries that are coming up more frequently with the advent of meat substitutes or vegan “meat”. Laura says climate change has caused many people to question the sustainability of eating meat.

There is a catch in her mind though, due to the highly manufactured alternatives on the market, as opposed to meat raised ethically and regeneratively. “I would rather eat 500g of mince from that animal than that highly processed, strangely artificial product.”

People need to decide to learn more about food, so they can be more empowered.”

Laura believes solving issues of climate and sustainability come back to the individual, as do most things in life.

“The more we palm off the decision making process to somebody else, the less control we have about what’s happening in our world.” From food to furniture, whatever we consume, it comes back to our own value systems.

“We all believe in certain core things that matter to us, yet a lot of us suspend that moral judgement, or that ethical judgement when it comes to what we consume. We sort of leave it at the door and just buy what we feel like.”

A striking testimonial on the Feather and Bone website suggests this model is resonating with people. A vegetarian describes the decision to start eating meat again after coming across the butcher shop. “A lot of those people find us,” explains Laura.

“We don’t feel like we should preach or tell other people how to live their lives but I think what we all need to do is understand what matters to us, what we care about and how the decisions that we make in our lives reinforce and promote those things we care about.”

Hear more stories just like Laura’s by subscribing to the Telling Our Story podcast on iTunes and follow podcast host Angie Asimus on Instagram for more updates.