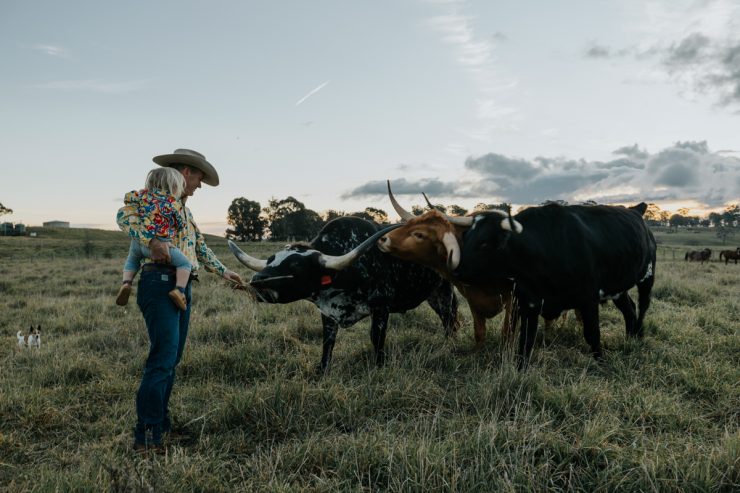 Wilmot Cattle Co is a sizeable operation – 14,000 acres spread across three properties in the Northern Tablelands of NSW. The physical footprint of this farm however, is only part of the story with its impact on the less tangible soil carbon market proving to be immense.

Stuart Austin is the dynamic manager responsible for brokering the sale of $500,000 worth of carbon credits to tech giant Microsoft, in a deal believed to be the first of its kind in Australia. He’s more than happy to share what’s worked for him in the hope others can benefit from the knowledge he’s learned along the way.

Perhaps part of the reason for that, is his true belief that his profession is a noble one – something that really impacts lives.

“It’s not just a piece of country for us to grow as much beef as we possibly can and make as much money as we possibly can. Obviously, we do work hard to achieve those things as well. Profitability underpins everything but the ecological health of these landscapes that we manage is absolutely front of mind,” Stuart explains.

“Our role is more than just feeding people. It’s taking care of this whole landscape.”

Wilmot Cattle Co is what’s called, a climate positive operation. The farm stores more carbon than it emits, in terms of methane from animals. Essentially, greenhouse gases are taken out of the atmosphere and stored in the soil. Stuart says it’s been quite simple to achieve.

“All plants grow using the process of photosynthesis, which is absorbing C02, releasing oxygen back into the atmosphere, and storing carbon as sugars through their roots in the soil. Trees are the first thing that people think of when they think of carbon sequestration.”

Stuart explains that trees take a long time to grow and it’s been shifting the focus from trees to grasslands that gave Wilmot Cattle Co an edge.

“We can make that process happen a lot quicker, in that every time we graze a plant, that sort of kick-starts the process of photosynthesis again. Effectively, what you see above ground is what’s below ground, in terms of root matter. So when we bite off say 6 inches of leaf above the ground, there’s probably six inches of roots that slough off underground. That turns into organic matter, which turns into carbon.”

“By doing that every 30 to 60 days, depending on the time of year, we’re constantly priming that photosynthetic pump and pushing more sugar and carbon into the soil.”

To monetise that process was the challenge. Stuart says soil samples were taken from Wilmot Cattle Co over a number of years. About three years ago, a detailed analysis was undertaken.

Partnering with the Regen Network, spatial imagery and remote sensing showed the data stacked up. The Regen Network believed they could calculate how many tonnes of C02 had been taken out of the atmosphere and stored in the soil. They were able to offer 43 000 carbon credits to the market.

Incredibly, at the same time, Microsoft was seeking to offset its emissions right back to the inception of the company. The deal was done.

“There’s a lot of pros and cons to being the first in the world to do something like this,” recalls Stuart.

“Someone had to get a deal done on soil carbon for the world to start recognising that soil carbon was a viable proposition.”

“What it has done is put an absolute rocket under the soil carbon market around the world.”

Good but definitely not perfect … yet

Stuart says measuring carbon will become easier as technology improves but is proud to have made a start on this important market.

“We’ve got to start getting comfortable with good, not perfect, with regard to soil carbon measurement and overcome some of those inaccuracies. I’m absolutely sure, we’re not the only farm in Australia to be in this position. We just happen to have enough data to demonstrate it.”

“It’s been a very exciting 12 months. We’ve had a hell of a lot of fun. We’ve learnt an enormous amount.”

There’s also an added bonus for consumers. It has been well proven that the nutrient density of grass fed beef is superior to that of a grain fed diet.

“A lot of that comes down to the diversity of a grass fed diet,” explains Stuart.

“All our paddocks have got as many different species of herbs, legumes, grasses etc. in them.”

“Just like people, we need plenty of diversity. We don’t just eat Weet-Bix all day.”

Stuart isn’t surprised to learn that only 25% of Australians believe farmers are adapting to climate change.

“It has been hard for us to share that more positive story and demonstrate what we’re doing.”

Inspiring stories like that of Wilmot Cattle Co have implications, not just for consumers but for fellow producers to understand that there is so much information out there if innovations are discussed and shared.

Hear more stories just like Stuart’s by subscribing to the Telling Our Story podcast on iTunes and follow podcast host Angie Asimus on instagram for more updates.