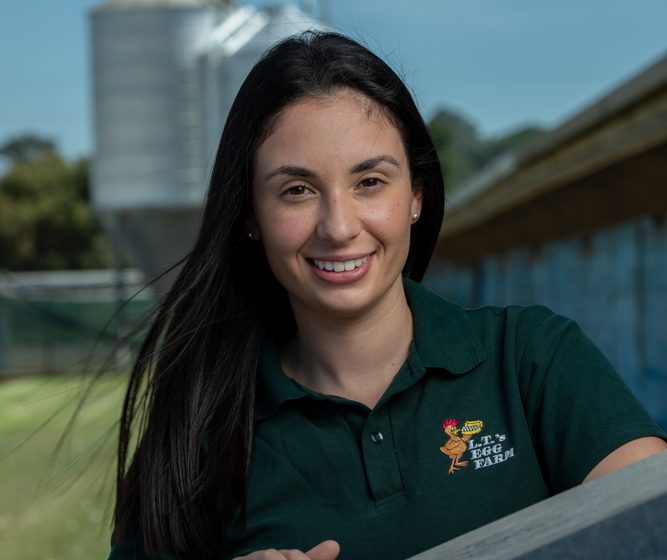 Caged, barn laid, free-range, organic – when did buying eggs become so confusing? If there’s someone who knows her eggs – it’s Danyel Cucinotta. She’s the first to admit she could talk all day about eggs! Growing up on LT’s Egg Farm, Danyel has seen her fair share of trespassers and vandalism. Instead of shrinking away into the background, the 29-year-old is tackling the industry’s public relations head on.

She’s had her say on national guidelines for the industry and is the youngest person to take on the role of Vice President of the Victorian Farmers Federation.

If she could clear up just one thing about she does, it’d be the misconception around caged eggs.

“Long gone are the battery cages that we see on social media sites. Generally, when animal activists present a video, it’s mostly one of those old battery cages but I assure you, they were phased out in the early 2000s, long before I was legally able to work. Now we have conventional and furnished cages in Australia, and we actually have both on our farm.”

Danyel explains the new furnished cages are 2.5 to 3 metres wide and 1.2 to 1.8 metres in depth with nesting boxes, perches and an extensive amount of space to roam around.

They’re like a cubby house for a chicken, is quite literally how I tell people they exist.

Danyel is the third generation working on the property at Weribee South in Victoria but her grandparents, who started the business, initially only set out to provide for their own family as immigrants from Cyprus.

“My grandfather vowed that if all he did was feed his family, then he was happy with that,” Danyel recalls.

It turns out, he ended up feeding many families with a legacy the family is now proud of, however, the road hasn’t been easy in recent years.

“Unfortunately, there’s a lot of misconception about the caged egg industry. I usually get painted as someone who is well behind the times, who doesn’t have the best interests of their animals at heart but that is so far from the truth.”

Back to the farm

In 2016, Danyel’s father asked his two daughters if they’d be interested in coming back to the farm. “I guess I had hesitations because we’ve had a lot of problems with trespassing. We have a lot of problems with people thinking I’m this awful person and no one wants to live their life like that,” Danyel shares. It’s been so bad Danyel has chosen not to live on the farm with her young family out of fears for their safety.

It was then that she decided to do something about it, implementing a community engagement program. Danyel has undertaken hundreds of talks in the local community, including schools, to debunk some of the most common myths floating around the egg industry. Nothing is off limits and she encourages people to ask the tough questions. “Anyone can ask me anything about my particular farm,” she explains.

The program has resulted in egg production on the property increase. A big part of that was starting up virtual reality tours.

“Essentially, you don’t want to be breaking biosecurity by allowing an extensive number of people into sheds because that’s how you spread disease. At the same time, it was really hard to show people, you have nothing to hide when you can’t open the doors. Instead, we built a VR system,” Danyel explains.

They’ve gone a step further than that by also opening an on-site deli and fresh food outlet where the egg is the hero of all the popular dishes. It’s Danyel’s take on progressing her family’s legacy, in her own way.

A place in the market

Through the talks and retail space, Danyel teaches students that caged chickens aren’t vulnerable to loss of life through predators or disease outbreaks. There is never a need for anti-biotics due to those biosecurity measures. Danyel says people are also surprised to learn 30 per cent of Victorians are facing food insecurity.

“They are a low cost affordable option. I love all three systems of eggs – free range, caged and barn. They all have a place in the market but it’s just about allowing everyone the option to choose. If your priority is making sure you have affordable protein on your plate and you can feed your children, then we’ll make sure we have the highest animal welfare standards.”

Danyel also explains the challenges with the Australian landscape being inhospitable for free range chickens in the centre of Australia. There’s also the land availability issue with most egg production happening in semi-urban settings where space is limited. “There still is the need for a low cost option,” explains Danyel.

I totally understand why it’s so confusing when people go to the supermarket or the local grocery store because there are just so many options for eggs. It is crazy.

Danyel encourages consumers to reach out to their local egg farmer to raise any concerns. “We actually love talking about chickens, eggs and our production systems so if you were ever confused, my advice would be get on the website, get on social media or just call the line and they will help you through understanding the production,” says Danyel.

Danyel says life for her changed for the better when she was appointed Vice President of the Victorian Farmers Federation.

“I won’t lie, I haven’t been openly welcomed anywhere, ever, until it came to the Victorian Farmers Federation.”

She was amazed by the positive feedback she received for her work to dispel mistruths about intensive agriculture. Danyel hopes to encourage other young people, especially women to take up roles on the land and become active in agri-politics.

“My god, what a crazy ride,” Danyel exclaims. “It’s so much fun, honestly.

One thing’s for certain, the future looks sunny side up for Danyel and her blossoming career.

Hear more stories just like Danyel’s by subscribing to the Telling Our Story podcast on iTunes and follow podcast host Angie Asimus on Instagram for more updates. 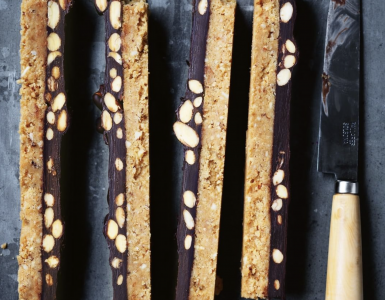