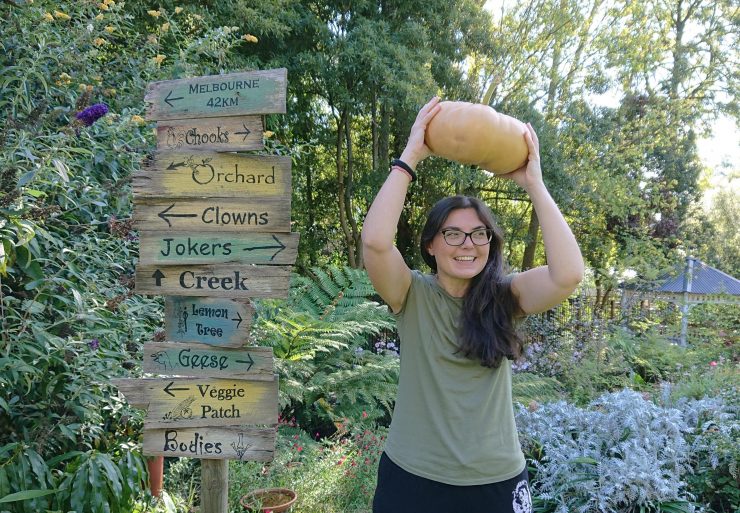 The delightfully named Buttenshaw Backyard Farm is the most magical garden in Montrose Victoria.

It produces a lot of food, given it’s only on a ¾ acre block. The space is bursting with apple and nut trees, raised vegetable beds and an abundance of berries. Some of the produce includes vibrant glass gem corn, rainbow-coloured chillies, pineapple tomatoes and golden beetroot.

We are growing the things you won’t find on the supermarket shelves, things that are rare and making sure that seeds live on for future generations.

The gardeners still have full-time corporate jobs, but the land is now so productive, many fans are trying to get their hands on the rare seeds Nat Buttenshaw specialises in.

The self-taught talented green thumb says that’s where her true passion lies – in the seeds. “I love being in the greenhouse and actually watching that germination process and checking on the temperatures, ventilation and lighting,” she says excitedly.

Nat has a sizeable online following, partly because some of the varieties she produces can’t be found anywhere else. The produce is largely heirloom open pollinated food.

“We are growing the things you won’t find on the supermarket shelves, things that are rare and making sure that seeds live on for future generations.” The list is enormous – Chinese pink celery, purple sprouting broccoli and golden raspberries.

It’s hard to believe but when they moved in, the land was pretty well empty.

“We’ve terraced the block so that we can maximise our growing space. Then, we plant pretty close together. We do a lot of companion planting and a lot of under planting where you plant one crop and then, when that finishes, there’s another crop underneath ready to go.

It’d be easy to think larger fruit and nut trees wouldn’t work on such a tight block, but the Buttenshaws have found a way around that too using espaliers, that grow flat against a wall or fence.

We do a lot of companion planting and a lot of under planting where you plant one crop and then, when that finishes, there’s another crop underneath ready to go.

“We’ve got about 38 apple trees, all different heritage varieties. Once we started, we realised we were going to have a lot of issues with fruit-fly, so we diversified into nuts and the harder shelled things.”

Despite the fruit-fly issues, no spray is used on this farm. “The way I see it is, nature has to work together. If you get a pest, and let it go beyond when you’re comfortable with it, if you don’t spray right when it’s infested, you leave it another week and the beneficial insects will turn up and deal with the problem for you.”

If your garden is lacking in the welcome insects, Nat recommends purchasing bugs like lady beetles online to help tip the balance in your favour.

There’s clearly an abundance of produce, so Nat has become an expert at cooking, freezing and preserving. But starting her own seed business also uses a lot of the food.

“That means we don’t harvest it at the time you would eat it. It stays on the plant a lot longer. We farm the seed and sell that wholesale.” The seeds are available through a lot of online seed retailers.

The seeds of success

“We also started selling seedlings ourselves this year. We can pull a fair amount of seed out of a small space. We got 18 kilos worth of glass-gem corn last year. Seed orders far exceed what we are able to produce.”

There is so much to the seed business and Nat has become an expert in the area. “Seed in Australia is very limited. You can no longer bring a lot of things into the country due to our quarantine restrictions. So, the things that came in with your grandparents and your grandparents-parents – they’re the only seeds we’ve got.

“As long as they are saved, and passed on through generations, and someone is keeping that seed alive, that diversity still exists. Otherwise, it’s imported from overseas and a lot of it has to be chemically treated.”

There aren’t many farmers growing these heirloom varieties through to seed. “It’s because they take longer to harvest. A lot of farmers are looking for a crop that’s able to be planted, harvested and sent to the supermarket and be sold.

“With seed, it takes quite a lot longer to get the plant through to the seed type. It’s in the ground longer, which makes your water bills bigger. You also don’t get turnover of crop. With heirlooms, they aren’t all ready at the same time, you’re harvesting tomatoes for three months. That doesn’t suit everybody. The profit isn’t huge,” Nat says.

With heirlooms, they aren’t all ready at the same time, you’re harvesting tomatoes for three months.

Heirloom and heritage foods don’t just take longer to grow, they are harder to transport.

“A lot of the time, the reason they aren’t mass produced is their storage ability. They may not store well or travel well.” To grow through to seed, the timeline could be six months to harvest the seed, two months of drying time, then the cleaning, packing and selling. It’s certainly labour intensive to produce something so tiny.”

If you’re intrigued, the Buttenshaws host an open garden, usually once a year. Check their website for confirmation, but they are working towards February 2023. Enjoy the whimsical walk that is Buttenshaw Backyard Farm.

Hear more stories just like Nat’s by subscribing to the Telling Our Story podcast on iTunes and follow podcast host Angie Asimus on Instagram for more updates.