With a childhood spent between Switzerland and Perth, Tracy Sullivan is in no way a traditional cattleman’s daughter, yet she now spends her days working on the animals from dawn to dusk – and sometimes longer.

When I begin to research Tracy, the first thing I notice is that she has a lot of letters behind her name: BSc BVMS MVS PhD CMAVA.

I tell her this and she laughs, saying she certainly didn’t set out to spend so much time in academia, she just wanted to be a vet so she could learn how to eradicate feral cats.

I was a young environmentalist and I loved animals. As a child in Switzerland I used to try to grow bamboo to send to the pandas in China.

Her initial years as a practicing vet were spent as a small animal clinician in Darwin, and she quickly fell in further in love with Australia’s north, having previously spent a year in Kununurra working at the roadhouse.

“When I was working up in Darwin, I was lucky to gain all these extra skills because there wasn’t a referral centre.”

“The great thing about working in rural areas away from big cities is that you have a chance to do all these specialised medical treatments that otherwise you’d refer to a specialist in a city.”

One of her proudest moments as a vet has been in Darwin, where she was the first in the world to cure a puppy of bullous emphysema.

“I wouldn’t have been able to do that if I’ve been a city because it would have been cordoned off to a to a specialist referral clinic.”

The longer she spent in the north, the bigger the animals she was seeing began to get, but it was only when she began working on a PhD in Goondiwindi with The University of Queensland (UQ) that she became hooked on working with cattle.

She spent plenty of time deep in Queensland cattle country and, with little prior experience with stock, she had to learn on the job.

I didn’t have great cattle skills when I moved to Queensland and started in Bungunya, but I had lots of really good neighbours and they let me practice on all their cattle.

“They were really welcoming to having a vet in the district and let me learn how to preg-test and everything on their cattle.”

“You read cattle just the same way as you’d read a dog, they just give off different cues but they’re still they still talk to you in nonverbal cues, and you still learn to pick them up. And you talk back to them.”

All the while she was still working part-time in UQ’s Goondiwindi lab and completing her PhD. She was extremely busy, but she didn’t mind.

Then, in 2010, UQ shut the Goondiwindi vet campus. It was at this stage that vets began coming to Tracy to ask her to start her own lab to keep doing semen morphology for them.

“I’d love to make it sound more exciting,” she says when I ask her about this job, “I class bull’s semen to check if there are any defects and how many sperm there are.”

“I basically tell the vets what a bull’s semen is looking like.”

Four years ago Tracy moved her lab to Broome and, shortly afterwards, was approached by the Department of Agriculture, Water and the Environment asking her if she would step in as their live export vet.

“And while I was having my interview they said, ‘there’s an abattoir just down the road, will you train up to become an abattoir vet as well?”

She took both the jobs and today loves the variety that the three different roles bring.

No day is ever the same. I just love working with the cattle at all the different stages.

“I’m still working on that work-life balance, but I don’t mind, I’m happy.”

Tracy is one of 11 young ag professionals showcasing their fulfilling and rewarding careers through the AgVenture Careers Expo webinar series. Listen to Tracy talk in more detail about her exciting career by registering for her webinar (held tomorrow!), here. 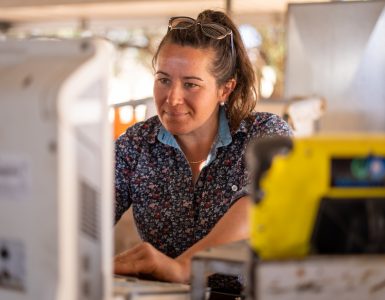